The participants have discussed vital questions of re-enactment movement and exchanged experience in creating anchronisms of various periods of Japanese history. The experts provided lively and vivid consultations on various matters of Japanese material culture.

The meeting agenda included the competition on chambara swords. Contrary to Japanese chambara, the ones the Russian re-enactors use are rather rigid swords without soft inflatable part. This time competitors suffered some lack of the place for fighting. So only short-cut chambara swords (tanto imitation) were used. The final battle occurred between the representatives of Iwakiri and Hattori clans. In stubborn struggle Hattori’s fighter won the day. Congratulations to the winner! 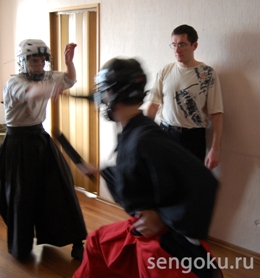 Koshiki Homon participants hope that there would be further meetings with increasing number of delegates and growing quality of re-enactment.